“Can you design an album cover and a 24 printed page booklet for my latest project, Rich?” Judge Smith has been producing music since the days of Van der Graaf Generator and, being a music lover, I couldn’t say no. The brief arrived along with the title; The Solar Heresies And The Lunar Sequence. I set to work, thinking. Judge had already remarked on some of my previous work, so I had a rough idea for direction.

The album is in two parts, part one, The Solar Heresies, and part two, The Lunar Sequence. The latter part gave immediate inspiration. A quick research of the phases of the moon, casting its shadow from the sun in a central position, and the album cover came to life. Next, the booklet.

I had an idea, almost like an old style ‘flick book’, I tried it in rough and it worked. The pages, when turned, shows the sun move across the pages, left to right, getting smaller until the full moon appears, which in turn moves across the pages, getting smaller, showing its cycle, until it’s a tiny black dot before and even larger sun and moon with the artist, Judge Smith, standing before them, wearing a suit with Devil horns on his head. 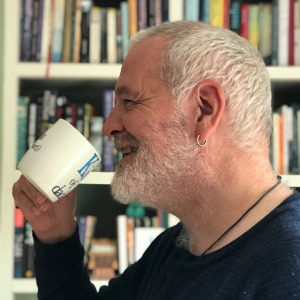